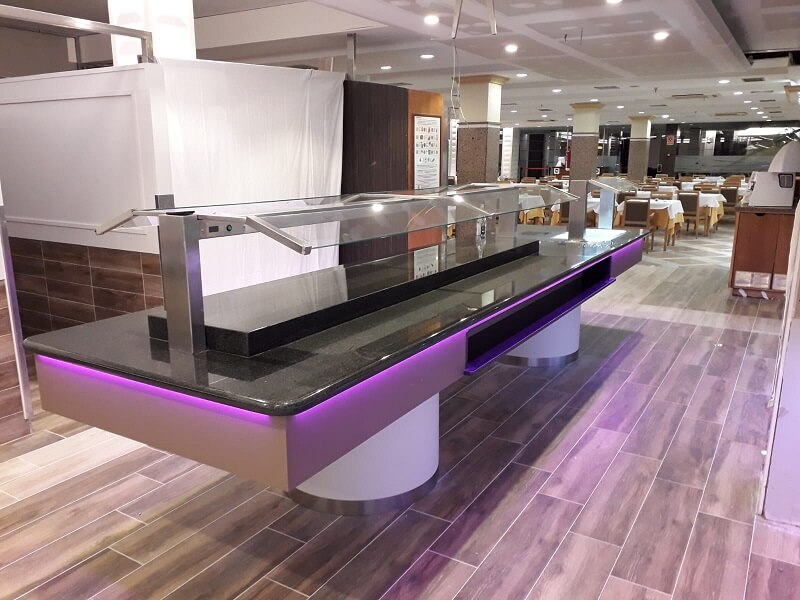 The Spring Hoteles chain has made in recent years a great investment for the integral reform of its three hotels in Tenerife: the Vulcano Hotel, the Bitácora and the Arona Gran Hotel.

The rehabilitation was completed with the final details of the Vulcan works, which reopened its doors 2 years ago.

As a last straw, all that was left was to incorporate the new buffets already manufactured in the new restaurant of the Hotel Bitácora, because until now they have continued to give the service with our old buffets that were already 21 years old.

The wait has been long but it has been worth it and after almost 2 years, the clients of the Hotel Bitácora will be able to enjoy their new buffets.

A great installation of buffets for a great hotel.

A complex installation since all the refrigeration equipment is remote and some of the furniture was embedded in pillars but has been done in record time and with the hotel open.

The equipment is very complete and not missing a detail, with show cookings, hot and cold central buffets, assisted buffets and several neutral areas.

We are grateful to the Spring Hoteles chain, which has once again committed itself to the quality of King’s Buffets and we value the loyalty and the work carried out in all its hotels during these 25 years.

We leave you with some photographs of before and after and the day of assembly and commissioning.

Soon we will show you more by giving the service and with customers.